Clean Up Your Inbox 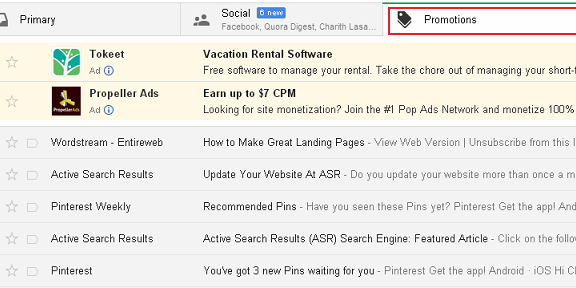 How many emails do you receive every day? On average I receive over 100 promotional emails. That is a lot of advertisements in my inbox and it might be time to clean it up.

I have already found myself not reading them when they come in and often times finding out several days later I missed out on a “deal”.

Your Email’s Impact on Your Budget

However, wanting to clean up my inbox actually goes beyond just cutting back on the number of emails I have to read. This also can impact my budget.

Like I said above I often find that there are “great” deals in my inbox. However, rule number one to determining how good a deal really is, whether you actually need the product.

So just because I get an email advertising the latest FitBit doesn’t mean that I need one. It just means that if I want one, I now have an excuse to get one. Which in the end is how we go broke.

So each day we receive an email from NewEgg, Kohl’s, Yankee Candle, and whatever other brands and stores you love. And each email is advertising “BOGO”, “everything in store is 75% off”, and “the biggest sale of the year”, which somehow happens multiple times a year.

This makes us think that we need to buy the item and we need to do it right now. But in reality the reason you don’t have a blouse to go with your skirt is because you bought it on impulse. And really your computer could probably just use a little TLC, not $100+ worth of upgrades.

Get Rid of Temptation

Each day you open your email, see an item you want, and then have to talk yourself out of buying it. Why do that to yourself? What is the purpose of getting those emails? I often hear people say “I want to see their new lineup” or “I don’t want to miss any deals.”

But, why do you care about their lineup or their deals. Unless you are looking for a specific item that you need you shouldn’t be shopping anyways.

If you need an item then that makes sense and you can sign up again. But in the meantime click unsubscribe and move-on.

You Will Be Happier

If I had to guess, once you unsubscribe from those pesky promotional emails you will be happier. You will see less slip-ups in your budget and you won’t know what you are missing.

Always remember that a deal is only a deal if you actually need the item. Otherwise it is just a waste of mony.

Well I have to run; I apparently have a lot of emails to unsubscribe from.